As with any question regarding the origin of the universe, and ultimately mankind, theories abound on both sides of the evolution-creation debate. Without going into details of the chronology and assumptions made on the evolution side, secular scientists have mostly settled on the Big-Bang Theory. As for creationists, several theories centering around the light-transit time issue have bubbled up to the surface and are still being investigated. The one that holds the most promise that this author and a well-known creationist astronomer by the name of Dr. Danny Faulkner agree is the Humphrey’s “White-Hole” cosmology. Its connection to God’s Word was explained in detail in this author’s previous blog article “The Biblical View of the Universe”. An excellent book  explaining in detail all past and current cosmological theories can be found in Dr. Faulkner’s book Universe by Design,which can be purchased online from the Answers in Genesis website.

In the beginning God likely created a mature environment, whether it was the earth or the outer cosmos. God tends to be consistent in all that He does as well as perfect. Current science has found that stars can be classified by color and temperature. This classification is most often represented by astronomers using what is called the Hertzsprung-Russell (H-R) diagram shown in figure 1. 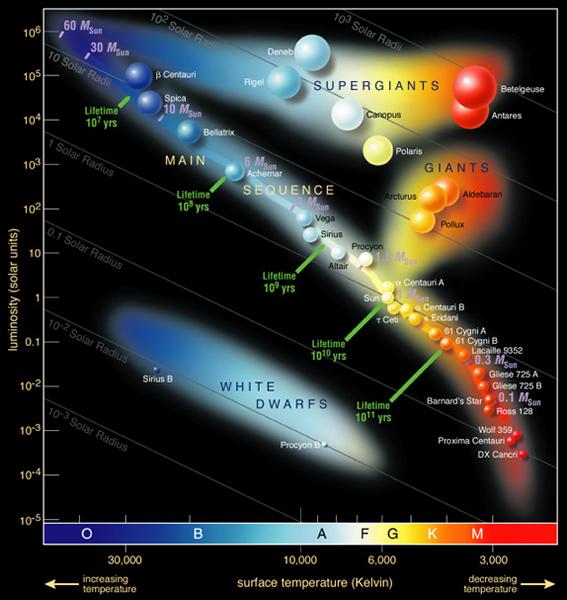 The primary feature of this chart is the broad diagonal line referred to as the Main Sequence, and is populated with known stars as indicated with our sun near the center. The cooler and redder stars are in the lower right, and the hotter and bluer stars in the upper left. In addition to the color and temperature scale on the bottom axis is the luminosity or brightness scale on the left axis with the top being the brightest. Also, reference lines and points are plotted relative to our sun’s mass and radius. This points to stars of all kinds being created by God for His glory as indicated by I Cor. 15:41 (KJV) “There is one glory of the sun, and another glory of the moon, and another glory of the stars: for one star differeth from another star in glory”. This diversity of star types can be easily seen in figure 2 which is a close-up of the globular cluster Omega Centauri and shows stars of all visual wavelengths (colors) indicating the wide range of stellar types present. 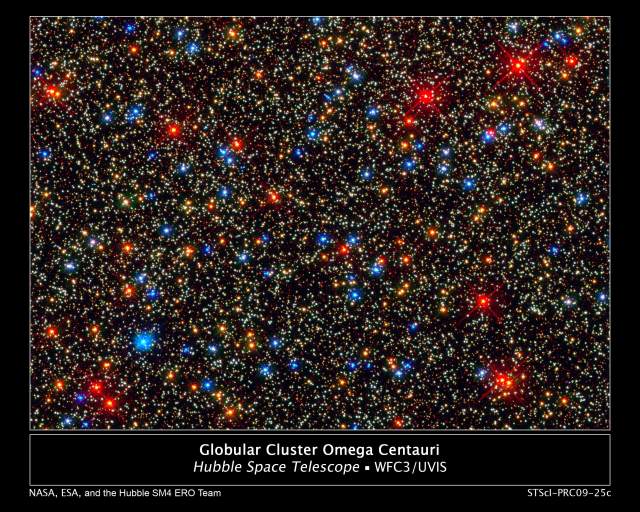 Stars are presumed to have begun somewhere on the Main Sequence and later migrate off that line due to changes in the star resulting from nuclear fuel burned by fusion being used up. Stars at the blue end of the H-R plot are thought to have a lifetime of about a billion years at most because of the prodigious rate at which they burn fuel, while stars of lesser mass further down and to the right have much longer lifetimes. Stars such as our sun are thought to eventually migrate above the Main Sequence line as a giant star. Not long ago secular stellar models seemed to indicate such stars could shine for 12-16 billion years, but astronomers have had to reel back those estimates to 10-12 billion years since the generally accepted age of the universe is only 13.7 billion years. Eventually stars of less than two or three solar masses end up going through either an ordinary nova event or many times a not well understood “lazy nova” process which results in a planetary nebula forming. In either case,  a white dwarf star remains as a remnant of the original star and current theories suggest that these condensed matter stars further collapse in time into what are known as neutron stars. This end state is generally considered the dead end of the original star but in reality, an intense magnetic field remains which can still interact with nearby gaseous material in an energetic way. But are these stars really dead?

A white dwarf star has the characteristics of being nearly as massive as our sun, but typically is as small as our earth. This indicates extremely high density and surface temperatures in the range of 50,000 to 150,000 degrees Kelvin, very hot, but not nearly enough for nuclear fusion to occur at their surface. These stars are represented by the lower center region of the H-R chart. In spite of their low luminosity, these stars are found throughout our galaxy by our largest telescopes as well as in globular clusters, being typically 10’s of thousands of light years away and surrounding our galaxy (see figure 3).

Because these stars are still hot, they can ionize any molecular gas clouds near them causing them to shine at significant distances. Consider M97, the Owl planetary nebula, which is shining by virtue of a single hot white dwarf at its center (see figure 4).

This nebula is one of the larger ones and is nearly 3 light years in diameter. The nebular theorists maintain that denser molecular hydrogen clouds alone, such as the M42 Orion nebula are breeding grounds for new stars, and don’t need additional help for that cloud to collapse, as discussed in a previous article “The Nebular Hypothesis Fallacy”. Figure 5 is a picture of a major portion of that nebula centered near the 4-star cluster called Trapezium which  are very hot stars near the upper end of the H-R chart and which illuminate most of the nebula. There are also a number of fainter stellar objects in this picture, some of which are presumed to be newly developing objects called protostars.

However, if the Owl nebula was superimposed on the 30 light-year wide Orion nebula, it would cover at least a few per cent of the magnificent object. If a few dozen white dwarfs were present in the Orion nebula, a significant portion of gaseous illumination could be explained (and maybe it is) if it were not for the hot “O and B” stars imbedded in the nebula as well.

On a larger scale, the question of how certain stars in globular clusters, considered to be nearly as old as the universe, are maintained is interesting since they seem to have little in the way of molecular clouds for fuel. These clusters orbit the central hub of our galaxy on the order of a few hundred million years per orbit. The blue stars in these clusters, nicknamed “blue stragglers” have been a problem for secular astronomers because of their relatively short 1 billion year life cycle. One possible explanation is that the more massive blue stars as well as the lower mass white dwarfs refuel themselves during passages through the dust and gas laden disk of our galaxy. Just as white dwarf stars in nebulae such as M42 may be collecting hydrogen gas on the way to being stars “reborn”,stars in the pristine gas poor globular clusters may do the same.

The entire discussion so far may point toward a possible pattern within God’s creation which mimics a process on earth long recognized. Since the time of Job in the era just after the Flood, the exchange of water between its three phases happens in a way that results in essentially no loss of that important ingredient for life. By looking at Eccl. 1:6,7; Isa. 55:10; and Jer. 10:13 (KJV), this recognition is clearly seen. What if a similar process were put in place by God during creation; only involving hydrogen, the simplest element in the universe. The exchange of this gas between stars, young and old, would perpetuate nearly all the created stars indefinitely except for the very few, very massive stars which destroy themselves in cataclysmic events known as supernovas, and produce little understood objects called black holes. Stars in this state exit the universe never to be seen again as mentioned in Jude 13 (KJV) “Raging waves of the sea, foaming out their own shame; wandering stars, to whom is reserved the blackness of darkness for ever”. The rest of the created stars, however, may well conform to the verse Da. 12:3 (KJV) “And they that be wise shall shine as the brightness of the firmament; and they that turn many to righteousness as the stars for ever and ever”.