The creation scientist in contrast to the evolution scientist looks at the universe through a much different lens. He begins with Genesis 1:1 (KJV) which gives the underlying premise for all special creative acts by God as well as later physical laws and processes, such as the second law of thermodynamics, we now observe. The heaven referred to in the first part of verse 1 is undoubtedly the space-time continuum absent matter. The second part (the earth) refers to created matter (out of nothing, ex nihilo). If Dr. Russell Humphrey’s “white hole” cosmology is adopted (ref. 11 pp21-31), that created mass resided as a single immense spherical body of water 3 light years in diameter (the deep in Gen. 1)  equal to the mass of the entire universe. That much mass would necessarily gravitationally distort the space-time continuum into another sphere by virtue of the law of general relativity. This distortion may be alluded to in Psalms 18:9 (KJV) which says “He bowed the heavens also, and came down: and darkness was under his feet.” The second part of this verse may indicate something else important that happened. The spherical mass would have created a discontinuity in space at some distance from that body. From an outside observer it would initially appear as a very large black hole which would then by God’s hand become a white hole expelling matter through the discontinuity, with enough left inside to create the earth and possibly the solar system. The change by God of the black hole to a white hole may be found in II Corinthians 4:6 (KJV) which declares “For God, who commanded the light to shine out of darkness, hath shined in our hearts, to give the light of the knowledge of the glory of God in the face of Jesus Christ.”. With the above cosmology, time would pass orders of magnitude faster in the outer cosmos compared to the near earth environment. This idea can be found in II Peter 3:5 (KJV) “…that by the word of God the heavens were of old, and the earth standing out of the water and in the water”. It is interesting that God referred to the heavens (presumably second and third heavens) as being old but not the earth. Also important may be the comma in the middle of that verse possibly signifying the discontinuity mentioned earlier and delineating an old outer cosmos from a young earth. If we allow this cosmology to exist, we can explain other things. Most important are the great distances observed in the universe because of time stretching which allows light from distant parts of the universe to reach earth while it is still young. Additionally, the red-shift in the spectra of distant objects can be accomodated also by the stretching of the universe as mentioned several times in the Old Testament. With respect to the nebular hypothesis, the creation scientist can interpret very differently what is currently being observed in our galactic region. In Genesis 1:16 (KJV) He said “… he made the stars also”. It is likely that God made much more than just stars (and  worlds or planets) but made vast clouds of gas and dust. These clouds could have been made to surround already existing stars or later come from stars which under went cataclysmic events such as supernovas which in time cross paths with stars as they drift through space.

Isaiah 50:3 (KJV) states that “I clothe the heavens with blackness, and I make sackcloth their covering”. Also, in Psalms 18:11 (KJV) “He made darkness his secret place: his pavilion round about him were dark waters and thick clouds of the skies”. The word “pavilion” is interesting in the modern context as it pictures a tent-like structure in many of our city parks which is open below allowing people to pass through freely. In some cases they have bright lights high inside of the covering illuminating the area below but hidden from those outside. There are numerous nebulae which consist of dense dust and gas clouds hiding very massive and bright stars, the light and radiation from which are seen around the edge of these clouds either by reflection or by excitation of hydrogen gas in the region.

These created clouds also could explain many of the observations cited by the nebular theorists including the stellar “dusty disks” surrounding some stars. Those star systems may have been encroached by a passing cloud and the central star and attending planets distorted the cloud gravitationally into a disk. Some of the “disk gaps” could have been sculpted by local planetary accretion of the disk material. 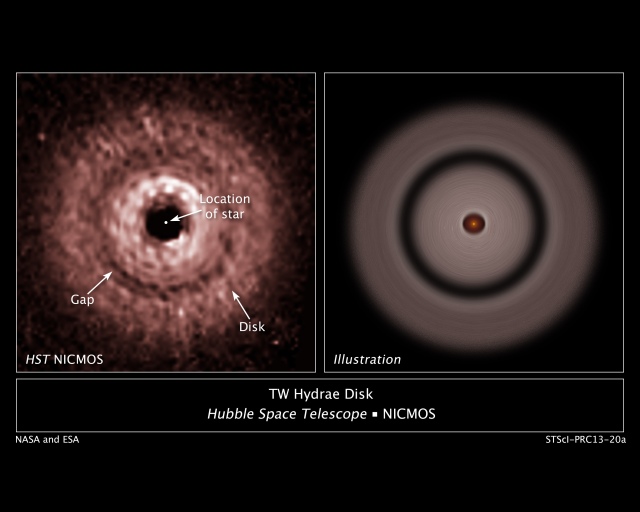 So-called protostars said to currently exist and radiating in the infrared may be pre-existing brown dwarf stars veiled by dust and gas. Indeed, the majestic details of God’s creation are proclaimed well in Psalms 19:1 (KJV) “The heavens declare the glory of God; and the firmament sheweth his handywork”. We should never let those who say we are the product of “star dust” silence us and as proclaimed in Ephesians 2:10 (KJV) “For we are his workmanship, created in Christ Jesus unto good works, which God hath before ordained that we should walk in them”.